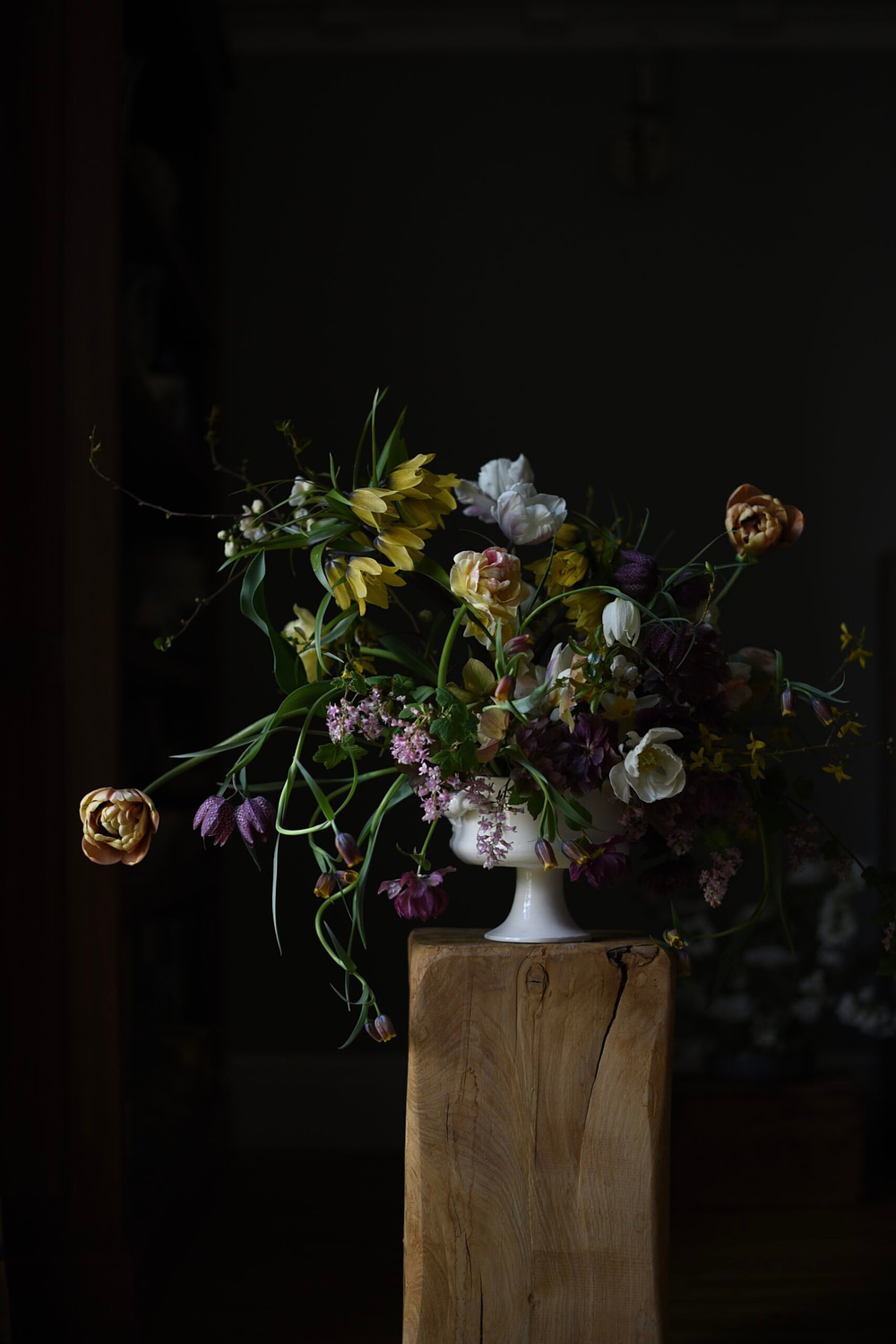 I know I’m not alone when I say I’m fascinated by those well known, dark-yet-colourful paintings of flowers dating back to the Dutch Golden Age (between around 1550-1660) done by the likes of Rachel Ruysch and Willem van Aelst. Truth be told it’s not necessarily the flowers in those paintings that have me wide eyed but the way the light is captured. It took me years to be able to do this with a camera and I’ll never forget the day that Sarah Mason made me take a photo of Mrs B (woman in pearls) next to a bowl of viburnum balls in the perfect afternoon side light from a tall window. Since then it’s been all about catching the right light…instead of juggling balls. And I’ve distilled this small business down into that “passion” – teaching others to see the light and watching as they capture it.

There’s one particular story of light catching that springs to mind today, because it’s spring and our tulips are at the very peak of perfection and, for once, it’s been a year where they’ve not caused me much trouble. I’ve not forgotten the time I “brokered” a deal on tulips for someone else and was almost bankrupted when it went awry, nor have I forgotten the tulip blight of 2016, or all of those years where we ran abundant tulip classes on dates when our own had yet to open. And, like many of us, I’ll not forget the spring of 2020. The one where I watched each tulip open because I had a lot of time on my hands, and the one where a much-longed-for class never happened…

A telephone call in early January 2020: “I’d like to come and see you for a Dutch Masters-style, one-day class. Can you fit me in?” shouted a formidable sounding lady on the phone over two dachshunds barking in the background. Never knowingly put off by a posh voice – the kind you know belongs to the former captain of the school lacrosse team – I reached for the diary, tried to sound as if the year was already extremely busy, and booked her in for a one-to-one day, mid May. “Will you still have tulips then? I absolutely love tulips.” Obviously from the South, I thought, as I reassured her that tulips in Yorkshire are not at their best until then. The words Dutch Masters are always music to my ears and, when an enquiry for a May wedding in a similar style came in a few days later, I felt that 2020 would be the best year yet for a small flowery business that thrives on doing work that “feeds the soul”.

Of course, the universe had different plans for May 2020 and, ironically with no people allowed to visit, no classes and no weddings, the garden was positively dripping in flowers from fritillaries to tulips, many of them the expensive historic varieties that Jill Shaddock and I had planted the previous winter in anticipation of some great classes with good vessels.

Good vessels turned out to be a particular passion of the lady with the little dogs, as well as tulips. I knew she’d set her heart on coming that spring, and making her own version of a Dutch Master with all of our tulips and in a vessel made by a British maker. But what could I do? There was a virus across the World, worse than the tulip virus that ruined fortunes back in 1637, and travel to Yorkshire was illegal. I suggested a refund or a postponement and the latter was chosen. So grateful was I that this lady was still prepared to invest in a future class that I suggested we could “do something with tulips now, over the phone”. And so began one of the best teaching experiences of my life, a two-year progression, which has produced not just one Dutch Master but a florist who has mastered her craft and also learned how best to capture all that she creates in the best possible light. Obviously that’s not down to me but to someone who wants to be brilliant, and to learn all she can and, most importantly, someone who is prepared to practise day in day out, because that’s what makes you good.

That first proper phone call, scheduled for the mid-May day when the real class couldn’t happen, had a profound effect on me, and I had no idea it would spark an idea that in fact kept my business afloat during ‘the Covid years’.

Listening is a skill. I think I might be able do it because of the previous job, where listening to people give evidence and listening carefully to every word they said was crucial. It turned out that ‘the lady with the little dogs’ was also a listener, in a very important capacity, and was involved in the kind of job where sometimes you have to talk folk down from a ledge. Also, she was a potter – so good with hands as well as ears…..in fact her signature vessels are now some wonderfully tactile vases and pots for flowers that actually have small ears (I think they might really be called lugs) on the sides. But it’s the eyes you need to be a good florist and they were what we needed to get working. So, I set a series of small tasks, tasks that it turns out were much needed in a time where being in your own surroundings was mandatory and boredom was lurking around every corner.

We started with small stuff. Small is always the best and so hard to get right. Both of us made the smallest bowl we could, just from tiny treasures in the garden. Of course, we looked into light too. Photos were exchanged and then began conversations in which we each looked at the other’s work in a critical way. From there we moved onto an in-depth study of bowls, using different shapes and sizes, some weeks focusing on colour, others on movement. More plants were put into the garden, phlox seeds were sown, a good camera was found. By the end of the year a new small business had developed and ‘bowls with soul’ were going off to various bits of Bath.

An engaging Instagram account appeared. Occasionally a wonky photo would be displayed at 6.30 am and I would politely ask why it was good. Usually it would be replaced with something brilliant by the end of the day. A website was in the making and I had to work out if I could, with all honesty, see a fledgling business fly off without a properly ‘decent’ name. The Potty Florist was in many ways absolutely right for a woman who will admit to being slightly flamboyant, an expert on pottery, and just a little bit eccentric but in the most humorous and charming way (I’m sure a woman who can carry off overalls in camellia print won’t mind that description). But, from all of our chats, I knew that this was also a woman who was serious about perfecting her craft and, after much thought, Sara Pearch Flowers came into being, with a website that by now had some seriously good photos.

The real life class finally happened, without tulips, that Autumn. I’ll never forget the bowl and the heady scent of Actaea ‘Queen of Sheba’ just outside the workshop door.

Fast forward to now, the May of 2022. Much has happened in the world, and in life, but tulips are a constant obsession for us both. Finally we have reached a time where travel is allowed and the full Dutch Master could be made, here in Yorkshire, and immortalised for all time in one of those photographs with just the right amount of side light. But, the trouble with tulips – and indeed life – is that they can throw in a curve ball every now and again…

…to be continued when fate allows.

PrevPrevious storyLight, Through a Lens

Spring 2020: The Year We Made the Garden Better, to Make Ourselves Feel Better Too